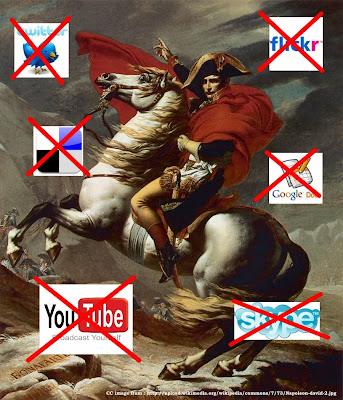 As we get started with the new school year, more and more teachers are gearing up to bring technology tools into their classrooms. However, even the most willing teachers often hit a wall of access issues, otherwise known as the Technology Director—the person who is in charge of and controls all aspects of internet access in a school. This is sometimes just one person, but that one person can make life very frustrating for the tech-enthused teacher!

Trying to keep this on the light side, I thought I would write a quick 10 step “TEST” to determine if YOU are dealing with a “Techie Prima Donna.”

1. Your Internet access is dependent on sucking up, brownies, and endless stream of diet Pepsi and/or coffee.
2. Your tech person spends hours pouring through reports to see if a staff member tried to access eBay.
3. There’s a sign hanging in your tech person’s office that reads, “BLOCKED – By Me!”
4. Your tech person believes that YouTube and Wikipedia will ultimately cause Armageddon.
5. Words like “router,” “network infrastructure,” “server diagnostics,” or “parallel ports” are the most common answers to the question, “Can I do this?”
6. Your tech person wears a t-shirt that says, “I’m the King of the World.”
7. You stopped attending technology workshops because everything you learn will be blocked.
8. You fear that your computer could be taken hostage at any moment, with explanations that involve words similar to #5 or in response to you asking “too many questions.”
9. Your tech person knows how to write code in COBOL, but has never heard of a Smartboard, Audience Response System, or an iPad. (And doesn’t see the need for them in the classroom…)
10. While you can’t prove it, there’s a good chance that your tech person can physically plug themselves into the network firewall.

Now, laughter aside, let’s look at the real issues:

· Is the Internet too slow and the issues are over bandwidth? Beef it up. We are too far into the 21st Century for this to continue to be a problem.
· Is the issue over the chance that students might find something inappropriate? TEACH THEM WHAT TO DO when they encounter such things! (Who else is going to?)
· Is the issue of access related to having just one person in charge who believes that everything on the internet is potentially evil? Perhaps their control issues would be better served in an elected position in another state…
· Is it really a good idea to have that one person in charge of all technology decisions? Doesn’t a committee make better sense, one that includes multiple stakeholders?
· Are instructional decisions being made by those that don’t have an instructional background? Might need to restructure the requirements for the position…

I think that there needs to be an understanding that we are an entire decade into the 21st Century. We are not at the point of “beginning” to need technology, we are already well-ensconced. Technology, at this point, needs to be ubiquitous. It needs to be like air or water. We don’t limit access to the air we breathe, but if it’s not just right, we do make others aware. (Air Quality Indexes, Signs on Mountain Tops about breathing…you know what I’m saying…) Same is true for water. We don’t avoid either one just because there might be some unhealthy air or water somewhere in the vastness of the world. We prepare and respond.

If you’re a technology prima donna reading this, I encourage you to read it over one more time. The seeds of humor are usually rooted in truth…
Posted by MikeFisher821 at 7:47 AM