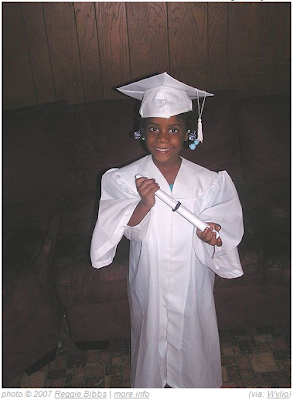 When I was younger, it was common practice to be asked, “What are you going to be when you grow up?” We’ve all heard it at one time or another. All of the mid-career folks my age still laugh about what we’ll be “when we grow up.” (Some of us talk about the warm places we’ll retire now too--our conversations are shifting with age!)
In the social networks I participate in, I get to see snapshots of what young people today are thinking--windows into their world that give me some generational perspective. Several days ago on Facebook, one of my previous students commented to a friend the following, in response to a post about doing well in college:

I didn’t flinch at the abbreviated “LOLspeak” that represents their 21st Century communication. But I did do a double-take on the “B.”

Even now, generations later, there is still an emphasis on “being” something, on growing up into a particular job. I wondered how much would change, if the student had instead commented:

“B” equals Bucket. “So what R U going 2 put in your bucket?” It makes me wonder if students see education as being done when the bucket is filled. You fill up your bucket with some stuff, trade it for a good test score, trade the test score for college entrance, trade the degree for a job, and then forget about the bucket.

I don’t think the bucket metaphor is specific to the United States either. Some colleagues and I have been sending comments back and forth about recent articles by Amy Chua and Yong Zhaoabout education in China. Filling that bucket is a valued thing in many places around the world.

But what are we REALLY doing to kids? Carol Ann Tomlinson, at last year’s ASCD conference in San Antonio, said, “Education happens in us, not TO us.” But there’s so much of the “to” and “do” still happening, and the student perspective is that the “do” is more important than the “learn.”

I wonder if the primary thing we should be doing in the 21st Century is concentrating on shifting perspectives to a “LEARN” mentality rather than a “DO” mentality. Aside from the latest technology, or the most valued 21st Century skill, it still, for me, needs to boil down to learning and the value of the learning process versus the completion of a task. It’s one of the biggest hurdles I see working in districts with teachers. Those old models have “worked” for so long, it becomes very difficult to see why a shift must happen. But for whom are those models still working? I think we all know the answer to that, and it isn’t the kids.

I’ve written about this many times in one way or another and am really just thinking in terms of the Facebook message today. It’s always those little moments that are the seeds of my own learning, as I think about our collective journeys through effective teaching and how we prepare young people to participate and succeed in the 21st Century.

The Facebook exchange didn’t include a response to “So what R U going 2 school 2 B.”

I’m betting the answer would be something along the lines of a scientist, an engineer, a teacher perhaps. But I wish that the answer could just be, “a Learner.”
Posted by MikeFisher821 at 11:39 AM