When you use the tagging features of the major bookmarking sites, you can easily create a list of relevant links for anyone to surf. For instance, if you are wanting to learn about VOLCANOES, you could find and add sites to your bookmarks that deal with volcanoes, but adding an additional tag of "classvolcanoes" or "period1volcanoes." This way, you can click on the unique tag and have one page with a unique web address that you can use in classes, to give your students to explore for homework, or just as an online resource for their research.

Many teachers in the past have spent hours creating "Virtual Field Trips" which not only involve finding relevant links, but also  the creation of a web page and directions for using the different sites. With Social Bookmarking, you can save notes along with your tags and label websites with specific information that your students can see, whether it's a description, a direction, or just your reasoning for choosing a particular website. In this way, you can very easily build a specific web listing of the sites you want to visit without the rigomarole of going through the entire Virtual Field Trip process!
Posted by Fisher at 6:18 PM 1 comment:

By now, you most likely know of the unfortunate and tragic deaths of both Farrah Fawcett and Michael Jackson.

What you may not know is the absolute tornado of information that poured into the internet almost moments after each event happened. If you are a regular user of Twitter, you’ll know that the sidebar trending topics both surged with key words like cancer, cardiac arrest, the names of both stars, etc.

While both stories are sad, and I certainly am sympathetic for both families, it’s hard to ignore the amazing things that have happened today and how these connective technologies are having an impact on everyone and the implications for their use in an educational setting.

I found out about Farrah initially from Twitter earlier in the day. I moved from Twitter immediately to CNN.com, and then confirmed the information at MSNBC.com and FoxNews.com. I rarely just take things at face value anymore, and wanted corroboration from a trusted source before I made up my mind about what happened.

Later in the day, I had CNN and MSNBC on in my living room when the first reports came across Twitter and Facebook about Michael Jackson. TMZ.com had reported Michael initially dead, but the other news outlets, including the big 3 mentioned above and Reuters were not confirming.

I sent out my first tweet to see what the response would be: 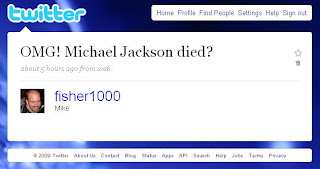 As information came in over Twitter faster than it seemed to be coming into the major news services, it was hard to deny that confirmation of his death was imminent.

I wondered on Facebook if the information had been confirmed: 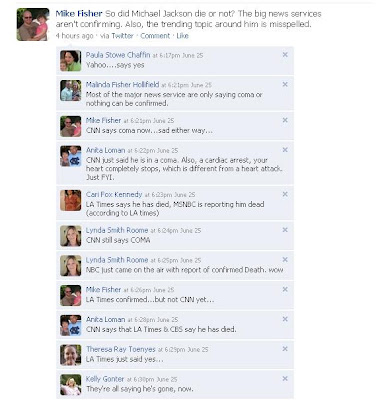 I also noted that the trending topic around him had been misspelled.

It wasn’t long before confirmation did indeed come, first from the LA Times, then FoxNews and MSNBC and finally, CNN. Since the news was confirmed, it’s been a nonstop flow of information, from MTV’s video retrospective, to CNN’s review of his life, even to ESPN’s angle of his Superbowl performance.

The reason that I believe that all of this has huge educational significance is the speed with which information was traveling back and forth, and the incredible conversation I was able to have with literally dozens of people over the course of just half an hour. We helped each other find information, shared links, thought critically about what information we were receiving, and drew conclusions as a group.

I think this says a lot about search literacy and critically thinking with web tools. I connected with my network, collaborated around finding answers to an issue, and came to a collegial conclusion as this all unfolded.

Today, Facebook and Twitter became my main sources for not only information, but also for determining if that information was factual, should be amended or discarded, or was worth exploring further before drawing conclusions.

After I posted this yesterday, a few people on Twitter and Facebook, including our friend Bill, pointed out that there was a mountain of misinformation also being reported in social media and in the regular news outlets.

This is what search literacy is all about.  We must learn and teach to filter out the most probable information by confirming sources and connecting the pieces until we can arrive at a plausible conclusion.  Tweets and Facebook updates we're chock full of people asking for confirmation, digging for additional information, and unfortunately also dessiminated wrong information, such as the death of Jeff Goldblum. ( Link to Mashable's Post on this incident. )

Bill pointed out that depending on who is in your network, the story you got could have been vastly different from what others might see.  I agree with that, but also think it's an opportunity, in the light of this morning and a continuing feed of information from traditional and modern sources of information, to examine how we receive what we read and determine how we are going to use that information.

This is a huge teachable moment.


Posted from Diigo. The rest of my favorite links are here.
Posted by Fisher at 5:31 PM No comments:

If you haven't yet heard of SHMOOP--Listen up!


Shmoop.com is an awesome resource for teachers, especially for Language Arts and Social Studies.  It is chock full of information and reference materials to make it useful for both the casual user and the deep thinker.  Earlier today, I had the good fortune of sharing ways that I'm using Shmoop with teachers with a member of the Shmoop team and wanted to post part of my conversation here.

The following represents several of the ways that I've approached using Shmoop with teachers for Professional Development purposes to help enhance their teaching and improve student learning:


Check back as I add to this list.  The more I work with teachers that find Shmoop useful, the more ways I discover to integrate it and maximize student achievement!  (Thanks again, Shmoop team!)

Posted by Fisher at 4:14 PM No comments:

Posted from Diigo. The rest of my favorite links are here.
Posted by Fisher at 3:41 AM No comments:

You Don't Have to Change The World...

...you just have to make a difference in someone else's.

On the way to work this morning, I drove past our local Fire Station.  Outside the Fire Station is a small fire hydrant sculpture flanked by two Dalmation statues.

Every night, usually, we take a walk around our neighborhood which always takes us past the Fire Station.  Every single time, we have to stop so that our 2 year old can "see" the dogs.  For some reason, she puts a small rock on each of their heads, gives them a hug and we continue our walk.  The next time we go, the rocks are mysteriously gone, and we repeat the process again.

When I drove past the Fire Station this morning, I looked over at the dogs and noticed that the rocks were still there, sitting on top of each dog's head, exactly where our daughter had put them last night.  Even though I knew she was safe and sleeping in her bed, I felt a little twinge of missing her, and wanting to see her right at that moment.  It felt kind of silly, but it made me think that this tiny little act, this "rock on the head" custom that we participate in, is huge to me.  It made a difference to me to know that this little ritual can have such a colossal effect on my mood and psyche. It was proof, right at that moment, that the past can help to shape the future and everything we do, every decision we make, ultimately has an impact.  What we think may be only a ripple turns out sometimes to be a tidal wave to someone else.

I like that the context of my day can be metaphorical for the world we're living in now, and how so many of these tiny daily interactions make the world of difference to me, the people I work with and teach, and ultimately the kids who benefit from a richer, more multi-layered educational experience.

Our daughter wasn't looking to change the world, but she did change mine this morning.  How often do we let these little subtleties of life shape us?  How often are our eyes open to notice them?  How willing are we to let these little things have an effect?

This is what the participatory culture is all about, having an effect on each other, no matter how small, and letting those tiny changes make the biggest difference.

In just a few hours, it will be time for another walk; it will be another opportunity to enjoy the fresh air, visit the dogs, place a couple of rocks on their heads, and change the world again.
Posted by Fisher at 11:38 AM 3 comments:

Now that the year is winding down, have you thought about what you'll do this summer?  Who am I kidding--you've probably been dreaming about this summer for months!

Let's just say that if you need an opportunity to develop professionally or hone your technology skills, there are several online opportunities available this summer that you can work on when you have time--and best of all--they are FREE!

I'm posting an initial list here, and will be adding to it as I come across more opportunities.

Enjoy your summer, but if you want to learn something new--check out the following:

Learn about Second Life in Education

Learn about Connecting to Other Teachers using Social Networking

Learn 21 things that the 21st Century Educator Should Know!

100 Free Online Lectures to help you be a better teacher!

How to use Animoto